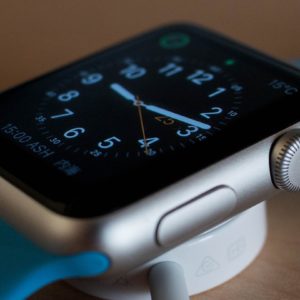 As Apple prepares to release its newest iteration of the Apple Watch, which is now up to Series 7, excitement has been building about a possible new feature: continuous blood glucose monitoring. The buzz stems from a partnership between Apple and Rockley Photonics, a UK-based tech startup that develops photon-based technologies and recently went public on the NYSE via a special purpose acquisition company (SPAC).

Apple has been buying products from Rockley since 2017 and, as the company’s largest customer, has invested $70 million in research and development projects over the years. Bringing photon-based technologies to the Apple Watch could dramatically increase the utility of wearable devices, especially if the technology is capable of tracking blood glucose reliably.

How New Photon Technology Could Revolutionize the Apple Watch

Rockley’s technology uses silicon photonic sensors and infrared light to monitor the composition of a person’s blood. According to the company, these sensors are significantly more accurate than those that have been created with LED technology. LED sensors are the most common among the smart wearables currently on the market.

Rockley’s photonic sensors make it possible to continuously and non-invasively monitor various biomarkers that have traditionally required specialized medical equipment to measure. One of these biomarkers is glucose—Apple has invested heavily in this monitoring capability, as a means of distinguishing its watch as the new industry standard. If Rockley’s accuracy claims are true, the new Apple Watch could potentially revolutionize life for patients with diabetes.

Currently, many smart wearables deliver questionable readings at times, which limits their efficacy and applicability in medical environments. Photonics may be the solution to this issue. Already, photonics technology has been used to monitor blood glucose by the device company Indigo Diabetes, a European startup that last year closed a €38 million Series B round. This funding is supporting the development of a continuous glucose monitoring device that relies on nanophotonics to measure both glucose levels and ketones in patients with diabetes. Indigo’s device is designed to be inserted below the patient’s skin. Clinical trials for this product are still pending, but findings could have a strong impact on the wearable technology from Rockley, especially since its photonics-based tech does not require implantation.

Why Continuous Blood Glucose Monitoring Is a Powerful Tool

Type 2 diabetes has reached epidemic status in the United States—over 34 million Americans (one in 10) have been diagnosed with the disease, and another 88 million have prediabetes. Keeping track of blood glucose levels is extremely important. Very high and very low readings can both be life threatening.

However, many people with diabetes who should be tracking their blood glucose throughout the day do not actually do so, which puts them at risk. Many people avoid testing because they have to prick their finger to draw a drop of blood every time they want to check their reading. The repeated inconvenience and pain of this finger prick can prevent people from checking their levels as frequently as they should. This means they can end up missing especially low or high numbers throughout the day. Without accurate readings, people who should make changes to their diet won’t know that they need to do so.

Of course, continuous glucose monitoring systems (CGMs) are available right now, but these are implanted devices that need constant access to the blood stream. Any implanted device comes with risks that can be significant for some patients. Still, for many patients, the bigger issue is the cost.

CGMs can involve high out-of-pocket costs; Medicare started covering CGMs for qualifying individuals few years ago, but not all commercial insurance plans cover them. Even when they do, getting approval can be a long process, and exact coverage levels vary greatly from plan to plan.

Because of these difficulties, a wearable device capable of continuous glucose monitoring could be a gamechanger for patients who can’t afford the implanted devices and therefore struggle to take glucose readings as frequently as they should.

The Potential Patient Benefits of the Series 7 Apple Watch

With continuous glucose monitoring, the Series 7 Apple Watch could help millions of people get better control of their diabetes. Even if the watch requires people to do finger pricks occasionally to double-check the reading, this is a much smaller ask than having to do it several times per day. And when patients have a comprehensive log of their glucose readings, their doctors can develop better regimens for them and understand the effects of medication changes. When increasing medications, there is always the risk of hypoglycemia, and continuous monitoring can quickly alert patients to issues before they feel any symptoms.

Apple also announced another feature of the watch that could help diabetics manage their condition. The new Apple Watch operating system may have integrated food tracking as part of the base software. Together with continuous glucose monitoring, this would help people see the effects of various foods on their blood sugar levels. This immediate feedback could help patients better understand the connection between their diet and their glucose levels and ultimately encourage more informed choices. Moreover, this data could be important for doctors because it could serve as a teaching point to help patients understand how to manage their disease.