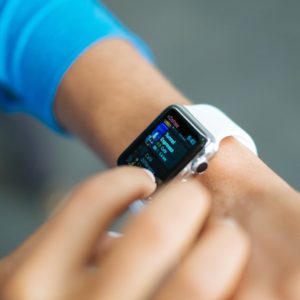 Wearable healthcare technologies have picked up a lot of momentum in recent years. Many of these technologies have developed enough reliability to be used as a clinical adjunct, such as the electrocardiogram feature of the Apple Watch. Furthermore, the pandemic necessitated new remote monitoring solutions.

For example, Oura recently announced $100 million in Series-C funding for its wearable ring. This ring has generated particular interest in the past year because it has continuous temperature monitoring. Since fever is one of the key signs of COVID-19, the ring can be used to identify who needs to be tested for the disease, helping diagnose people much earlier than they would otherwise.

Moving forward, wearable technologies will likely play a major role in the delivery of health care. The physiological and biochemical data collected by these devices can help with everything from diagnosis to fine-tuning management.

Wearable technology has quickly advanced from gathering simple data like daily step count and heart rate to include much more detailed information that can be beneficial to clinicians who are used to seeing patients at a single point in time. Having access to more longitudinal data makes it possible to make better-informed decisions related to patient care for people with a wide range of different chronic and even acute diseases. Despite the many exciting possibilities created by wearable devices, there are still some potential pitfalls, including the following:

So far, much of the wearable market has been driven by advances in the devices themselves. As such, not much attention has been paid to how data gets collected and transmitted, which has raised concerns related to privacy. In the future, companies will need to spend more time focused on privacy, especially if these devices begin syncing with electronic health records to deliver real-time information to medical providers. Robust authentication and authorization systems will be paramount to ensuring the private collection, transmission, and analysis of data.

The supply chain for wearables presents several issues. On the most basic level, the demand for these devices could cause issues with accessibility, especially if physicians begin “prescribing” them to patients. The other part of the equation is the fact that the supply chain likely involves components from a wide variety of vendors. Collecting pieces from different vendors can leave devices vulnerable to attack since chips and other components within the wearables can be tampered with before assembly.

Countries across the globe have different policies in terms of data collection and the ethics of information transmission. Legislation will play a key role in how device security is developed. However, these regulations could come into conflict with each other, which could cause delays within the industry. Since the wearable field is underregulated right now, it will be important for regulatory bodies to agree sooner rather than later on minimum security requirements and other concerns.

The medical field has seen an incredible boost from the Internet of Things in the past couple of years. While these advances can improve patient care and keep facilities operating at peak efficiency, they also open the door for new forms of attack. These attacks include malware that could potentially compromise medical devices, including wearable technology. Since wearables are likely connected to a smartphone, gaining access to these devices may become a primary motivation for hackers and people focused on identity theft.

Another real concern about the implementation of wearable devices in the clinic is physician burnout. The amount of information collected by these devices can be overwhelming and difficult to keep track of over time. One of the potential solutions to this problem is artificial intelligence-driven systems that can recognize patterns and alert physicians when needed, but this sort of technology needs to have proven reliability before it would replace physician attention. Even then, physicians may feel an obligation to review the data themselves.

Wearables will certainly play an increasingly important role in the delivery of health care, but it is important to implement them responsibly. Before doctors begin asking patients to wear these devices, it is important for all individuals involved to understand the potential risks as well as the benefits. The conversation should also include what will be monitored through the device and why, along with how this information will be used by the clinician.

It is also critical to set the expectation that any breach of data from either side will be reported immediately, from an attack on an electronic health record to the theft of one of the devices. Providers need to be ready to detect and remediate any threats to the digital device networks they employ, which may involve creating more robust IT teams in not just hospitals but also patient clinics to ensure that all proper security measures are taken to protect privacy.