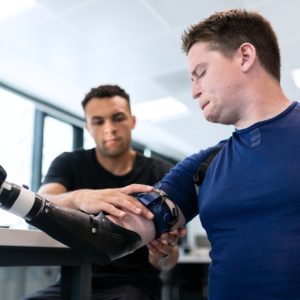 Healthcare technologies continue to develop at an incredible rate and 2021 promises to herald a number of new advancements. One of the most exciting new technologies that may become commercially available in the near future is a bionic arm that patients can actually control with their thoughts.

The mind-controlled prosthesis is the result of seven years of research in Sweden and has the potential to improve radically the lives of anyone who has lost a limb. The prosthesis involves using osseointegration, a method of surgically attaching the prosthetic to bone, muscles, and nerves, as well as placing electrode implants that can pick up and interpret the brain’s signals. This allows people to use the limb in a natural and intuitive manner.

Here’s what you need to know about the prosthesis and the future of prosthetics:

The Excitement behind the Mind-Controlled Prosthesis

A study of the technology has shown that the prosthesis is feasible for use in a wide range of different personal and professional activities. This new offering significantly expands the possibilities for people who have lost a limb.

Historically, the range of options has been small. Generally, prostheses need to suction to a limb using a compression cup. People with amputations often report that these prosthetic sockets are uncomfortable or even prosthetic limbs downright painful. As a result, people often stop using their prostheses altogether.

While the new option involves surgical attachment, it avoids the constant discomfort of the compression cup. The osseointegration process makes the prosthesis part of the body in a way that does not require adaptation.

The researchers in Sweden behind the new prosthesis implanted the bionic arms in four patients and then followed them for a period between three and seven years. Never before had bionic arms with implanted electrodes been used independently at home. As a result, many questions about overall functionality and long-term durability needed to be answered.

Even after a period of years, the prosthesis was used effectively by these patients in both their personal and professional pursuits. The individuals involved in the study were largely unhappy with their traditional prostheses and wanted a different option. The mind-controlled prosthesis was a better solution as it provides not just control, but also sensation.

How the Bionic Arm Compares to Traditional Prostheses

The process of receiving the arm begins with osseointegration. The bone inside the lost limb gets extended to the point that it can attach directly to the prosthetic arm. At that point, electrodes are implanted directly into nerve and muscle tissue. These electrodes are able to intercept neurologic signals from the brain and communicate them to the bionic arm.

For example, if the patient wishes to make a fist, the brain will send that signal to the arm. The electrodes pick up this signal and send it through an artificial intelligence-driven algorithm that interprets the message for the arm. Then the device forms a fist. The process has been referred to as intuitive control as it uses the neural pathways already developed prior to the loss of a limb.

One of the most exciting elements of intuitive control is the fact that it is bidirectional. For example, if the signal to make a fist is meant to clasp an object, touch signals get triggered and fed back to the brain. Thus, the brain registers the feel of the object and patients recover a realistic sense of touch.

This process is very different from that of traditional prosthetics. Often, people have a nonfunctional limb that is present solely for cosmetic purposes. Those limbs that do have functionality accomplish it through a system of pulleys and cables. Unfortunately, this design can mean that the prosthesis is quite heavy, which can add to the discomfort in using it.

There are osseointegrated limbs in use today, but most of them do not have the neural connections available with this new design. Some patients have myoelectric limbs, which fit over the residual limb. Similar to the osseointegrated prostheses, myoelectric limbs can be controlled by the mind using electric signal to nerves and muscles that get translated to the prosthesis. However, the electrical sensors for these options attach to the skin from the socket of the prosthesis instead of being contained under the skin.

Making This Technology Available to Patients in the United States

Mind-controlled prostheses are a major step forward for patients who have lost a limb. The technology will certainly become available to patients in the United States, but the question is when. One of the biggest issues when it comes to bringing this technology to the market is cost. The difference in cost between a body-powered limb and one that is osseointegrated is quite high, which may limit its availability.

Some of the nation’s leading research institutes, such as the University of Chicago and Johns Hopkins Medicine, have developed their own mind-controlled prostheses similar to the one in Sweden. Yale Medicine has developed a program focused on rewiring nerves in a residual limb to make it easy to provide this sort of limb in the future. This sort of program lays the groundwork for easy adoption one the technology gets approved for patient use. However, cost will continue to be a hurdle.