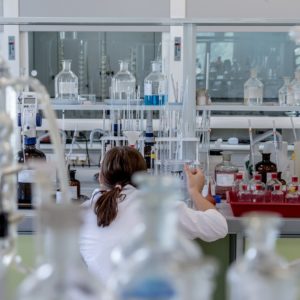 Artificial intelligence is playing an increasingly important role in modern science, from chatbots that can help with triage and diagnosis to laboratories that are completely self-automated. While the idea of a self-driven lab may seem like science fiction, it’s not—the possibility of a lab that identifies key experiments and then carries them out without any sort of human intervention is almost within reach.

A company called IDTechEx has recently begun to tackle this idea and identify the hurdles that still exist. IDTechEx contends that a self-driven lab requires three technology pillars—laboratory informatics, robotics, and materials informatics—to operate successfully, and it has laid out a plan to tackle each one in a detailed report.

Laboratory informatics and robotics often work hand-in-hand. These technologies drive the experiments while collecting the data that they produce. These systems may look very different depending on the goals of the laboratory being automated. In some environments, fully digital platforms may be feasible. In others, robots carry out the procedures while sensors monitor them to ensure they are completed correctly and collect the relevant information for later analysis. These two factors will have an impact on the safety and reproducibility of experiments, as well as the ability to generate usable data and then share it both internally and externally depending on the players involved in the investigation.

As both robotic and laboratory informatics are technologies that have been under development for a long time, we are closer than we think to a time when self-driven labs are feasible.

The Challenge Presented by Materials Informatics

A field that requires more development is materials informatics, also called cheminformatics or bioinformatics depending on the usage. Materials informatics plays a key role in the various stages of the experimental cycle, from choosing substrates to making retrosynthetic predictions. This form of analysis is also key to understanding structure-property relationships, which is what would drive further experimentation and new research questions.

IDTechEx sees materials informatics as the key to making closed-loop laboratory processes feasible on a large scale. For the most part, materials informatics currently deals with identifying the properties of an existing input material, which is an important process. However, the true value from an experimentation standpoint is the ability to do the reverse. That is, identify desired properties and then reverse engineer them into a material.

Unfortunately, the ability to reverse engineer materials is not straightforward. Plus, the technology is severely underdeveloped—algorithms are simply too immature and the overall data infrastructure is far from comprehensive. With more people working on the problem, progress can be made, but the issue is that the existing data is sparse and biased, not to mention full of errors.

The path forward depends on collecting better data, but the issue becomes a chicken-and-egg question. Does the automated experimentation or high-quality data set come first? For the time being, research scientists will play a crucial role in troubleshooting the research and design processes while allowing automation to accelerate them as much as possible. Down the line, it could be possible

While a lot of work needs to be done in the field of materials informatics to make self-driven laboratories commonplace, several top minds from Harvard University, the University of Glasgow, and the University of Toronto, among others, are focusing on this issue. Likewise, at least one system, Kebotix, is already up and running in Cambridge, Massachusetts. The Kebotix system can brainstorm and test novel compounds autonomously. While Kebotix focuses primarily on the development of new material compounds, similar systems are also being developed in pharmaceuticals, which could drive drug discovery.

Examples of Autonomous Labs in Operation

Outside of materials informatics, some examples of self-driven labs are already up and running, which holds promise for broader medical research applications in the near future. One example is the US Air Force Research Laboratory, which created the Autonomous Research System in collaboration with Lockheed Martin. This system has been used to optimize the growth of nanotubes autonomously by controlling various experiment parameters. The technology is currently limited but being actively developed, and it is exciting to think about the progress that has already been made. Meanwhile, a lab in Europe has developed an autonomous robot that works on the discovery of new supramolecular complexes with chemical engineering applications.

Another success that deserves mention comes from North Carolina State University in collaboration with the University at Buffalo. This year, researchers from the two universities demonstrated proof of concept for a system that can produce a quantum dot in less than 15 minutes according to set parameters. A quantum dot is a crystal on the nanoscale that has semiconductor properties with applications in optics and electronics. Such a system could propel research on the applications of quantum technologies in the medical field.